Ten Years Later: Lessons For Today From The Occupy Movement

Popular Resistance brings you daily movement news and resources and organizes/participates in campaigns at the local, national and international level. DONATE TODAY to keep this important work going.

All donations of $50 or more may receive a Clearing the FOG item (T shirt, water bottle or tote bag) from the Popular Resistance Store. After you make your donation, email info@popularresistance.org to claim your gift.

It was ten years ago this week that thousands of people from across the country and from different social movements started an occupation of Freedom Plaza in Washington, DC that lasted six months. The action was called “Stop the Machine, Create a New World” to reflect the two-pronged approach of resistance to harmful policies and practices and building positive alternatives. The coalition behind it was the October 2011 Movement, named similarly to movements that arose in Egypt, the January 25 movement, and Spain, the May 15 movement. Popular Resistance was born from that October2011 coalition.

During the winter and spring of 2011, major protests that occupied public space occurred in countries throughout the Arab world, known as the ‘Arab Spring.’ Occupations also took place in state capitals across the United States, beginning with Madison Wisconsin in February. Most of the protests were focused on opposing austerity measures, worker exploitation and other human rights abuses. The October2011 protest, which sought to spark an ‘American Autumn,’ also explicitly opposed war – the October 6 start date was chosen to coincide with the beginning of the new austerity budget and the tenth anniversary of the invasion of Afghanistan.

Organizers of the October 2011 coalition began meeting early that year in January to plan a campaign that would challenge the power structure effectively. The traditional tools of democracy were not working to counter growing wealth inequality, austerity and wars. Throughout 2011, the more than 100 organizers from across the nation worked tirelessly to bring groups that worked on different issues together, to plan strategy and logistics and to promote the campaign. In July, the Occupy Wall Street action was announced, and October 2011 organizers participated in that planning too. Nobody knew what the result of our work would be but by that fall, people were holding public space and taking militant action from coast to coast. The Occupy Movement took off. 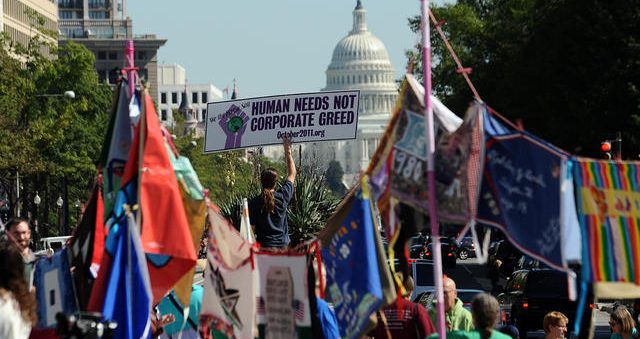 To mark the tenth anniversary, I spoke with Bill Moyer of the Backbone Campaign (click here for that interview) and Chris Hedges, a noted author and host of On Contact (click here for that interview), about the political and economic environment in 2011 that gave rise to the Occupy Movement, the lessons learned and what is happening now. The Occupy Movement had a tremendous impact that is still being felt today but we continue to face many serious crises.

This is a good time to reflect upon what Occupy/October2011 did right and how that could inform our current organizing. Here are a few of the lessons:

Overall, the Occupy Movement has had a huge impact in the United States that will ripple out for years to come. It changed the national dialog on wealth inequality and the corruption in our political system and empowered many people to fight for their rights.

Occupation of public space is a tactic, not a revolution in itself. It was part of a take-off moment when an issue that resonated with many people came to the forefront. Social movements come in phases. The hard work of building on that take-off is where we are now. As the Popular Resistance School teaches, success comes when there is national consensus that there is a problem, the current system can’t solve that problem and that we need something new and when a proportion of the population acts on that national consensus.

While there have been some victories in the past ten years, conditions have continued to deteriorate in the United States. The political elites are failing to address the crises we face such as poverty, debt, the pandemic, the climate crisis and the growing national security state. The Biden administration is continuing many Trump administration policies, as Hedges points out in his recent article, “America’s Fate: Oligarchy or Autocracy.”

Just as they created the conditions for Trump to become President through their neoliberal policies that bailed out Wall Street instead of Main Street, the Democrats and their liberal cheerleaders are continuing to fail to provide real solutions to our many crises. Hedges writes, “The liberal class, fearing autocracy, has thrown in its lot with the oligarchs, discrediting and rendering impotent the causes and issues it claims to champion. The bankruptcy of the liberal class is important, for it effectively turns liberal democratic values into the empty platitudes those who embrace autocracy condemn and despise.”

A movement led by the working class and front line communities that has a vision of what we aspire to create and that is willing to take strategic action is essential. The seeds of that movement are scattered across the country and are blossoming into worker walkouts and strikes and direct action campaigns to stop deportations and fossil fuel infrastructure as well as debt and attacks on our education system. Others are growing into the alternative solutions we require such as worker cooperatives, public banks, food sovereignty, the abolition of police and prisons and more.

The best way to counter the rise of autocracy is to continue to expose injustice and take action to stop it while showing there is another way that will make everyone’s lives better and working to create that. Solidarity is fundamental. We have the power to create tremendous change in the United States if only we have the courage and discipline to use that power effectively. When times are hard, we can remember what Hedges concludes in the article cited above:

“If we achieve nothing else in the fight against the oligarchs and the autocrats, we will at least salvage our dignity and integrity.”